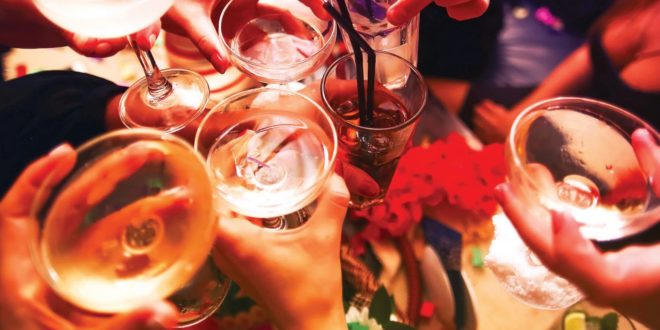 Is there such thing as a harmless drinking of alcohol?

Sobriety is the natural, normal state of a person, society, and humanity as a whole. There is no, and cannot be, any benefit from consuming alcohol since the basis of any alcoholic beverage, ethanol, is a narcotic poison.

Open any encyclopedia or do a search the term “alcohol” on the Internet and you will find out that alcohol is often used as a synonym for “ethanol” Chemical formula: C2H5−OH] – a flammable, colorless liquid of burning taste and unpleasant odor that is highly toxic. Alcohol is the strongest protoplasmic poison and has a particularly detrimental effect on the central nervous and cardiovascular systems, as well as on the liver. When ingested, it penetrates into the protoplasm of all the cells of the human body. The lethal amount for an adult is 300-400 ml of 96% ethanol when taken in one hour or 250 ml in 30 minutes. For children, a lethal dose can be 6-30 ml of 96% ethanol. Its effect on the body is that of a depressant; a psychoactive substance which depresses the human central nervous system.

What causes everyday people to commit such absurd and unnatural acts as voluntary alcohol consumption – a highly toxic, poisonous substance?

The fact is that since early childhood we are all subject to the influence of deeply false information about alcohol: from traditions, proverbs, songs, movies, television, and advertising – to the behavior of parents and peer influence. As a result, consciousness is distorted by this pro-alcoholic information and a person starts to believe that drinking alcohol is normal, justifiable, and in some cases even necessary. These beliefs, formed at an early age, cannot be destroyed by threats or punishment, or by using traditional or alternative medicine. However, you can change your beliefs by researching reliable information (medical, scientific, historical, economic). By doing this, false beliefs begin to fade and new ones will be formed toward a sober, healthy lifestyle.

So, the myths and truth about drinking alcohol.

Myth: Alcohol gives you energy.
Truth: Of course, when alcohol is consumed, a significant amount of energy is released, equal to 7 calories from 1 gram of pure alcohol. However, this is not used to create energy – as when eating proteins, fats, and carbohydrates – but as a flame in which other nutrients are burned. Alcohol burns nutrients outside of the needs of the body, and its harm is immense.

Myth: Beer, wine are less harmful than hard liquor.
Truth: This statement is akin to the previous one – about the “harmlessness of moderate use”. The formula of ethanol in all alcohol products is the same, and its disguise often leads to more frequent use and larger quantities. Juvenile alcoholism often begins with beer for men and wine for women.

Myth: Alcohol warms you up.
Truth: Did you know that, according to statistics, the vast majority of those who have had their fingers and limbs frozen off, or even froze to death, were under the influence? Alcohol leads to the expansion of small, superficial blood vessels and increases heat transfer. As a result, it can seem to a person that they have become warm, while their body is in fact overcooling.

Myth: Cognac and vodka expand blood vessels; and are the best remedy for pain in the heart.
Truth: The cardiovascular system’s defeat from drinking alcohol is observed in the form of alcoholic hypertension or in violation of the work of the myocardium (cardiac muscle). The direct, toxic effect of alcohol on the myocardium is the basis of alcohol damage to the muscles of the heart. Simultaneously, cardiac arrhythmias and heart failure will appear.

Myth: Alcohol increases potency in men.
Truth: Drinking alcohol can certainly help remove barriers and promote more relaxed, uninhibited behavior. However, potency under the influence of alcohol, on the contrary, decreases. Shakespeare also wrote that “it provokes the desire, but it takes away the performance”.

Myth: Alcohol helps to relieve stress.
Truth: Drinking alcohol creates the illusion of relieving stress. In fact, tension in the brain and in the entire nervous system persists, and when the buzz passes, the tension is even greater than before – with the added “bonus” of fatigue.

Myth: Alcohol promotes relaxation and put one in a cheerful mood.
Truth: Fun and laughter are important and necessary moments in a person’s life. They give rest to the brain, carry thoughts away from everyday worries, and strengthen the nervous system. But laughter and fun are useful only when they occur in a sober person. Drunken “fun” is nothing more than arousal under anesthesia. This stage of narcotic arousal has nothing to do with fun nor gives it rest to the nervous system. Instead, it acts as a depressant and is often accompanied by headaches, apathy, fatigue, unwillingness to work, and so on; which is never observed with sober fun.

Myth: Production and sale of alcohol are beneficial to the economy.
Truth: Yes, the retail sale of alcoholic beverages in Ontario is subject to provincial taxes, which are included in the retail price and account for more than 30% of it (www.fin.gov.on.ca/en/tax/st/). However, alcohol consumption causes great economic damage.

According to a report prepared by the Canadian Institute for Substance Use published in 2014, alcohol and tobacco use cost more than $38 billion to the criminal justice system, health care system, and in labor productivity.

The World Health Organization (WHO) reports that the cost of treating patients with alcoholism and diseases caused by alcohol consumption is accounted for around 40% of the entire healthcare budget in some countries.

From this brief juxtaposition of myths and truths about alcohol, it becomes obvious: trying to prove that black is white and that the toxic, narcotic substance ethanol is not only harmless but in some cases, useful for human consumption, is a shameless and criminal lie! It is said that it is impossible to force a person to change; a person can change only if they have sufficient motivation and are armed with truthful, objective, and undistorted information. Be educated, informed, and healthy!

Previous What is Truth?
Next Healing Power of Art: volunteer program “Art at Heart”