Truffles. The most expensive mushrooms in the world

Many of us associate the word “truffle” with childhood and chocolate candies in bright, attractive wrappers. How incredibly desirable their childhood taste seemed! Did you know that the recipe for chocolate “truffles” was made by the famous French cook Antoine Dyufo in the distant 1895? First the confectioners in France started producing them, and then in other countries “truffles” began to appear made with slightly modified ingredients and other recipes. In the Soviet Union, few people tried the French “truffles”, but ours, domestic ones, were the best treat for children and adults, and not everyone could afford them.

Perhaps, initially, the name of the candy “truffles” in Europe was associated with a rare type of mushroom-truffles that grew in the deciduous forests of Italy, France, Portugal, Switzerland. Picking up these delicious mushrooms required certain skills and was carried out with the help of specially trained animals: pigs and dogs.

In Soviet times, few people even among avid mushroom pickers knew about the existence of truffles. Recipes with truffles were removed from cookbooks, like everything else that was associated with the so-called “bourgeois kitchen”, and the truffles themselves were blacklisted products, “unnecessary” for the Soviet man.

At the time of Tsarist Russia, truffle mushrooms were exported to many countries.

The truffles in Russia were found by the emigrants from Italy, France and other European countries whom Peter the Great invited to settle down in Russia.

Gradually, the popularity of truffles in Russia grew. The capital of Russian truffles for two whole centuries was Moscow Region. The peak of truffle picking came in 1814, when the Russian army was returning home after the defeat of Napoleon’s troops. Both aristocracy and ordinary people loved this wonderful mushroom. Entire villages specialized in the craft of growing truffles. In many provinces of that time, wealthy citizens laid truffle plantations in their forests and parks. Among the nobles, it was considered prestigious to grow truffles in the territory of their estates. Especially a lot of truffle landings were laid in the Ukraine.

Truffles are underground mycorrhizal fungi growing at a shallow depth under the roots of deciduous trees and bushes: oaks, birches, hornbeams, beeches, filberts, elms, poplars, lindens, rowan berries, hawthorn, etc. Truffle is round or has a tuberous shape; colors vary from white, yellowish to black.

Real truffles are edible (although inedible mushrooms are also found among the Truffle family). They are characterized by a mushroom taste with the smell of deep-fried sunflower seeds or walnuts and a strong aroma.
What is remarkable about this mushroom? – It is an exquisite rare delicacy, is one of the most expensive mushrooms in the world. Gourmets around the world appreciate these “underground” mushrooms for their rich taste, which turns any dish into a masterpiece of cooking art.

In addition to unsurpassed taste characteristics, the fungus has unique medical qualities: it strengthens the immune system, is a good aphrodisiac, returns “sexual power”, prevents inflammatory processes of all kinds, arthritis of all types, has a calming effect, cures nervous disorders, helps the elderly, suffering from “old weakness” “Improves the condition of patients with Alzheimer’s disease, regulates the hormonal system, improves eyesight, has an antioxidant effect, increases vascular tone and muscles fibers, truffles are used in cosmetology (rejuvenates the skin and reduces wrinkles). And this is not a complete list of medical qualities of truffles. 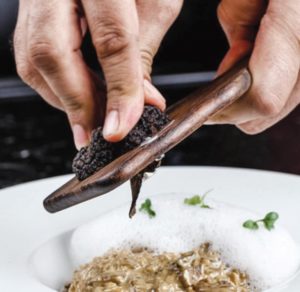 The demand, high cost, popularity and unique characteristics of truffles (they are both a rare delicacy and a natural remedy for many ailments) are pushing entrepreneurs today to cultivate mushrooms in places where they have not been seen before. As we already mentioned, artificial cultivation of truffles began in the 17th century. Since then, the cultivation of delicacies has been successful all over the world.

But in this article we would like to talk about a successful entrepreneur, an enthusiastic mushroom grower and a great nature lover from Ukraine – Alexander Dzhiga.

Alexander is a graduate of the Lviv Forestry Institute, which today is called the National Forestry University of Ukraine. Alexander’s father and grandfather were hereditary foresters and instilled in him from childhood a love for nature, for the forest, for living creatures and vegetation in the forests. They taught him to understand and distinguish mushrooms, herbs, not to be afraid of physical labor. Alexander’s friends suggested him to grow valuable types of truffles, the plantations of which had been founded since the times of Alexander Suvorov in many areas of then-Russia.

And Alexander was excited, found the plantation, and gathered the required spore material, bought about 20 hectares of land in Vinnytsia region, planted it with hazel, with which different types of truffles grow in symbiosis, and under every bush he sowed spores of these valuable mushrooms-truffles. The harvest can be gathered in 5 years. Alexander calls up all entrepreneurs in Ukraine and other countries who want to grow truffles, and he is ready to help everyone who wants to create a business based on these delicious mushrooms. His goal is to restore truffle plantations in Ukraine. There are few such people, big enthusiasts who are not afraid of difficulties, like Alexander Dzhiga. We are deeply grateful to him for his work, infinitely proud of him and wish him health and success in business!

Speaking of cultivating truffle mushrooms in Canada, farmers in southern Ontario artificially grow valuable types of truffles, and dishes cooked with these truffles can be tasted at the best restaurants in Toronto. And if you are not familiar with this unique delicacy, then in the upcoming New Year we wish you to visit one of these restaurants, try and appreciate this rare, most expensive, delicious and healing mushroom.

Svetlana Poltavets
Co-author of the book “Atlas of Mushroom Healers”

Previous The Art of Being Yourself
Next A new perspective on mental health: anti anti-depressants