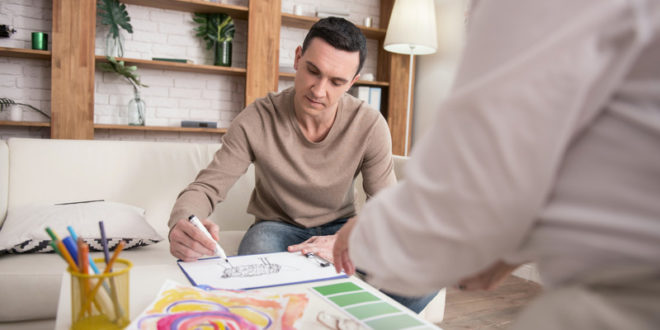 Healing effects are easily explained if interpreted in terms of a religious picture of the world. Man is created in the image and likeness of the Creator. And this in turn means that he is similar to the Creator in the main thing, in the ability and the desire to create, make, organize the Cosmos (Greek “order”) from Chaos.
Therefore, a person who is not engaged in self-actualization (creativity), begins to languish like a plant without water or sunlight. He drops leaves, does not bloom and the only help can be … art therapy.

Why do people nowadays cannot satisfy their need for self-actualization?
Just one hundred years ago such problem did not exist. The everyday life of all social strata of society (from noblemen to peasants) was thoroughly imbued with creativity. The man himself created the interior of his house, clothing and utensils. He played music to entertain himself during holidays and thought up fairy tales … A hundred years ago, his eyes were not fixed on the screen of a telephone, computer, or TV, no, they watched a dancing flame of a fire, a candle, a fireplace … imagination is capable of  creating such images under the light of the fire that none of the Hollywood movies can compete with them!

But times have changed and the daily creativity has disappeared from the life of the people, art settled down at the museums, and a man without creativity began to decay. And then psychology came to the rescue, sending forward its avant-garde – art therapy.
First of all, this type of therapy is able to help people with severe neurotic disorders, since art therapy easily allows to bypass censorship of consciousness and pulls out all LATENT states, for example, deeply hidden and repressed personality conflicts, and forgotten injuries.

In a normal state, a person’s consciousness does not let inquisitors go inside, and therefore 95% of the work of any psychotherapist is destroying the walls of consciousness, drowning his “censorship” in order to penetrate the Unconscious and get to the bottom of the true root, which cause the problems.

This is the magic of art therapy! A patient who does not want to talk with a psychologist can pick up a lump of clay and concisely portray his problem, while not knowing what he is doing! And having done this, after a while he “thaws”, and the psychologist has the opportunity to have verbal contact. Similar cases in the history of art therapy are described in details. Such cases show how a lump of clay or a piece of paper with a pencil took the patient out of aggressive silence, depression, pre-suicidal state, out of trouble…

Besides, as psychiatric practice has shown, art therapy is a powerful means of bringing people together, especially where it is hard to establish “normal” contacts. In a situation of alienation due to severe chronic diseases, physical and emotional injuries, art therapy begins to work wonders.

Previous Healing Power of Art: volunteer program “Art at Heart”
Next The Art of Being Yourself